Film Review in The Vancouver Sun 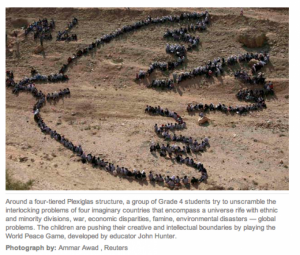 Winning or losing, solving global warming, achieving world peace or getting a good mark for your team is not the goal, says Hunter in a phone interview from Charlottesville, Va.

There is no end game.

“The process is the thing. What they go through is the reward. It hardly matters how they come out. The energized learning moment is the point.”

His work is captured in the Chris Farina film World Peace and Other 4th Grade Achievements. The classroom documentary opens the Projecting Change film festival in Vancouver on Tuesday.