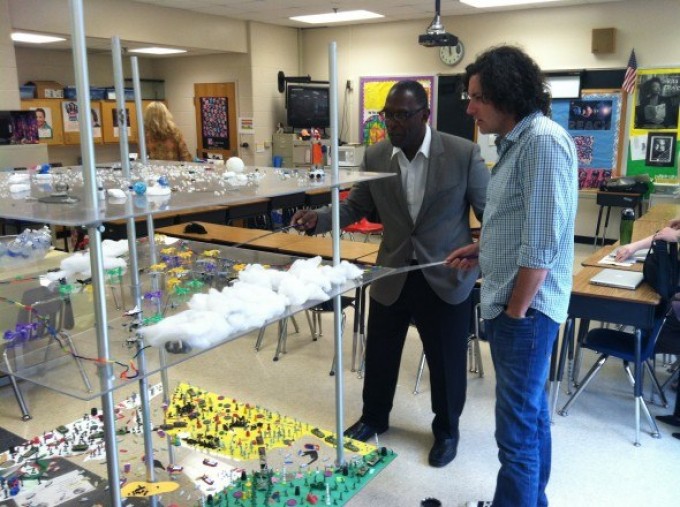 Serendity brought National Geographic’s Good Traveler Aric Queen to John Hunter’s classroom during the first week of May. The interest was mutual as John’s curious mind talks with Aric about his world travels, and Aric is impressed by John’s compassionate demeanor and sophisticated teaching approach with 9 and 10 year old children.

Here is the beginning of Aric’s post about his visit with John Hunter, whom he describes as a World Peace Visionary:

That couldn’t be right. This was the man who had been voted TED Talks‘ “most influential speaker” in 2011 (if you haven’t seen his speech, you’ll probably want to click here). A documentary about him and his project has been aired in every school in Norway, on national television in Israel, in South Korea, all over the Middle East – even in Estonia. Both the Secretary of Defense and the United Nations have brought him in to talk. And Bill Gates just opened for him at a conference – opened for him.

And he’s still on bus duty at the local elementary school where he teaches?

I was confused, until I drove down to Charlottesville, Virginia to meet him.

I found him waiting in the drizzle with the same smile on his face that millions around the world now know well. A sense of serenity poured off him as he extended his hand; he is the corporal incarnation of the project that has him taking calls from every major news outlet, world powers, and a long list of celebrities.

I had hoped to show a different side of the game, something no one had thought of yet. This was my first interview as The Good Traveler and I wanted to make an impression… but I couldn’t.

If you sit with him awhile, he might even talk about his previous career in music, or the time he spent in India in the ’70s…”

Read the rest of this post on Aric’s new blog.