Pam Moran Writes About the Trip to The Pentagon 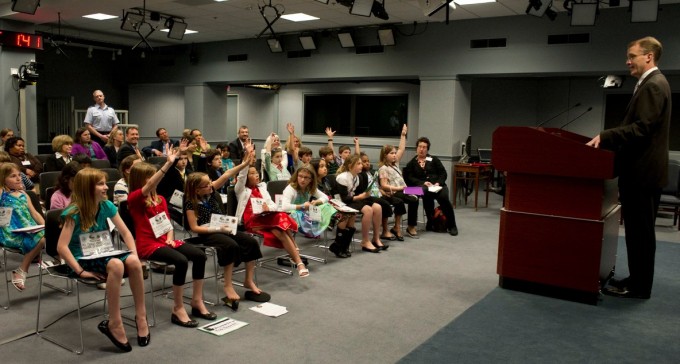 Pam Moran is the superintendent of schools for Albemarle County and is the president of the Virginia Association of School Superintendents. Recently she accompanied John Hunter and his class of enthusiatic, knowledgable, excited 4th graders to visit Leon Panetta and staff at the Pentagon. She pens this very thoughtful reflection of the trip for the Richmond Times Dispatch.

“The question was pointed and the questioners unyielding. If Israel decided to bomb Iran’s uranium enrichment facilities, would the U.S. help secure overflight rights from Saudi Arabia?

The press secretary at the podium in the Pentagon took his time. He looked his anticipatory audience squarely in the eyes and said, “I’ll have to get back to you.”

This is a tough crowd. A secretary general of the United Nations, head of the World Bank, a few prime ministers. And, these folks were fresh from a meeting with Defense Secretary Leon Panetta. They wanted answers.

They also were 9 years old. Fourth-graders at Agnor-Hurt Elementary School in Albemarle County and veterans of a brilliant educational exercise called the World Peace Game. Designed by John Hunter, an extraordinarily thoughtful and boundary-stretching teacher, the games have been the object of intrigue for young students for close to 30 years. This was the first time, though, that World Peace Game students had graduated into the halls of power in Washington.

Hunter’s technique and the highly valuable life skills it delivers are the subject of an award-winning documentary, “World Peace and Other Fourth Grade Accomplishments,” that has been shown all over the globe. At the Pentagon, it thrice attracted standing-room-only audiences after being provocatively offered as the answer to the question, “Can a Fourth-Grader Do a Better Job Than You?”

Read the rest of the article here on the Richmond Times Dispatch site.