In January of 2014, John gave the keynote speech at the Corvallis Martin Luther King, Jr. Week events.  In the audience, Ele Adams, then a High School Jr., as well as her mother, Terry Adams, were so inspired by John’s lecture, that they were moved to action. Mom and daughter became determined to help launch the World Peace Game in Corvallis, OR.  Terry and Ele even attended the Menlo Park Trinity School Master Class in preparation to facilitate a future World Peace Game. at home.

The August 2015 Class and Camp in Corvallis is now scheduled due to the coordinated efforts by area educators from Corvallis Schools, Oregon State University, and particularly, Terry and Ele.  Their dedication to spreading the ideals of the World Peace Game is truly remarkable. 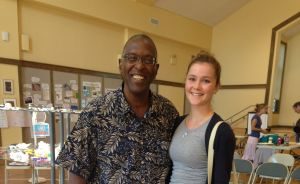 John with Ele Adams in Corvallis