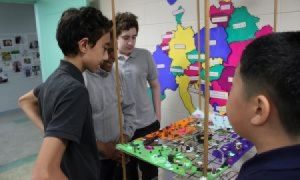 Players Pondering Peace at a Game in Seoul South Korea 2014

Approximately 80 million people speak Hangungmal (Korean) worldwide, currently. In the near future, the book,World Peace And Other 4th Grade Achievements will be available to Korean readers in Hangul, the written form of that tongue. Who knows? Perhaps John will be signing copies of the translated work in bookstores across South Korea.