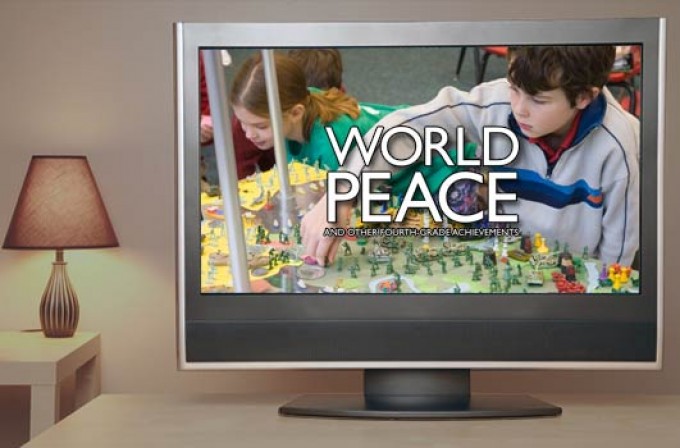 World Peace and Other 4th-Grade Achievements will be broadcast on public television beginning in May 2012.

World Peace and Other Fourth-Grade Achievements is supported by:

World Peace and Other 4th-Grade Achievements interweaves the story of John Hunter, a teacher in Charlottesville, Virginia, with his students’ participation in an exercise called the World Peace Game.

The game triggers an eight-week transformation of the children from students of a neighborhood public school to citizens of the world. The film reveals how a wise, loving teacher can unleash students’ full potential.

The film traces how Hunter’s unique teaching career emerges from his own diverse background. An African-American educated in the segregated schools of rural Virginia, where his mother was his 4th grade teacher, he was selected by his community to be one of seven students to integrate a previously all-white middle school. After graduation, he traveled extensively to China, Japan, and India, and his exposure to the Ghandian principles of non-violence led him to ask what he could do as a teacher to work toward a more peaceful world.

Hunter teaches the concept of peace not as a utopian dream but as an attainable goal to strive for, and he provides his students with the tools for this effort. The children learn to collaborate and communicate with each other as they work to resolve the Game’s conflicts. They learn how to compromise while accommodating different perspectives and interests. Most importantly, the students discover that they share a deep and abiding interest in taking care of each other. World Peace and Other 4th-Grade Achievements will inspire others by documenting the unheralded work of a true peacemaker.