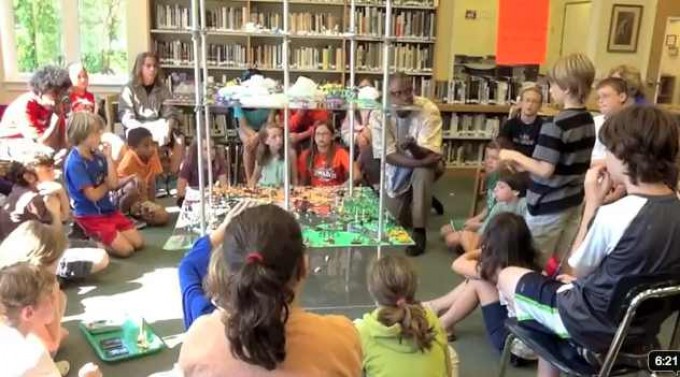 The World Peace Game was hosted at Tandem Friends School during the last week of June.  35 students gathered each morning for a week to problem-solve and collaborate around the world dilemmas John Hunter has designed into his game.

Most students came from Virginia; however some students traveled from other places just to come and play the World Peace Game. Two brothers came from Miami with their mother, who is a teacher. Their mother observed game play in the mornings along with 15 other teachers from around the world who came to learn with John Hunter. These boys relished in their game experience as their father is a former student of John’s who also played the World Peace Gamewhen he was in elementary school. Two other brothers traveled from Germany to play the game after being excited the John Hunter’s TEDtalk.

Teachers spent the afternoons learning about the game and how to create learning environments that are are intellectually rigorous, fun, and exciting as what John has created with the World Peace Game. Teachers from Charlottesville were joined by teachers who traveled from Seoul, Korea, Tel Aviv, San Diego, Alaska, Nashville, Miami, and DC.